During conference week, delegates will be able to attend a large variety of cultural events (see also a yearly calendar of events celebrating Shakespeare).

Some events are by invitation, but will require a free registration, others are paid events, for which delegates can purchase discounted tickets.  In all cases they will need to show their conference badge for access.

For events requiring registration or payment, a limited number of seats are available. Tickets will be issued on a first-come, first-served basis.

Please register online by March 31, 2014 for every event and reception you wish to attend. You will need to show your invitation ticket, conference badge and picture ID to gain access to the receptions.

Participants can visit the following exhibitions during the week. In some cases, free registration is required as some museums only accept small groups.

A few years after the release of Macbeth in 1948, director Orson Welles (Citizen Kane, Touch of Evil) decided to adapt another play by Shakespeare: Othello. The shooting proved chaotic: the first producer abandoned the project, the film had to be unexpectedly recast and a number of financial problems forced Welles to interrupt shooting several times. The result is a stunning adaptation of Shakespeare’s tragedy. The actor-director, working alongside celebrated decorator Alexandre Trauner, played on the contrasts between light and shadow in each shot of this aesthetically amazing Othello. The film, which was rewarded with the Grand Prix at the Cannes Festival in 1952, has been digitally remastered for this release.

For other screenings starting April 23, participants may obtain discount tickets (5€) with their conference badge(offer valid for the first 100 tickets).
In partnership with Carlotta Films.

World premiere of the original score by Robin Harris (2014), commissioned by the Société Française Shakespeare, performed with Laura Anstee

The film will be introduced by Prof. Judith Buchanan (University of York).

Event open to the public, with prior reservation. Conference participants are invited to the premiere upon registration.
To reserve/purchase tickets, please click here.

24 April: I Capuleti et i Montecchi

An opera by Vincenzo Bellini in two acts. Libretto by Felice Romani. 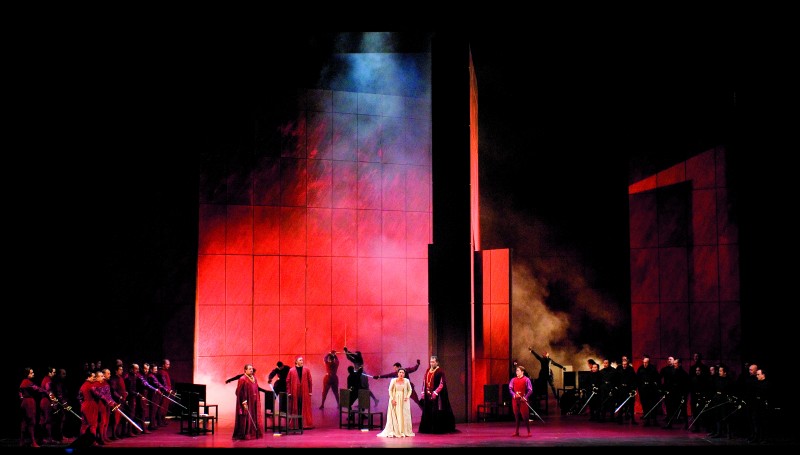 When he adapted Romeo and Juliet, the librettist Felice Romani chose to go back in time past Shakespeare, to the Italian origins of the legend. He tightened the storyline, editing out Mercutio, the nurse, the moonlight and the nightingale… The drama becomes more somber, the quarrel between the two families a veritable feud. The music of the two lovers, whose lives are crossed and intertwined, overwhelms the soul and illuminates the world. Under the baton of Bruno Campanella, Ekaterina Siurina and Karine Deshayes lend their voices to the lovers, themselves embraced by Bellini’s intensely dramatic music. 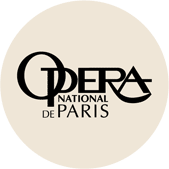 20% discount. This offer is reserved for registered participants to Shakespeare 450 and to members of the Société Française Shakespeare. It is not retroactive and cannot be combined with other offers and is restricted to performances on April 24 and 26, 2014 at 19h30, for 1st category seats.
To purchase tickets, please tick the appropriate box on the registration form. You will receive a promotional code which you will need to book your ticket on the Paris Opera website. Please note that this offer expires January 5th, 2014.

In French without subtitles. 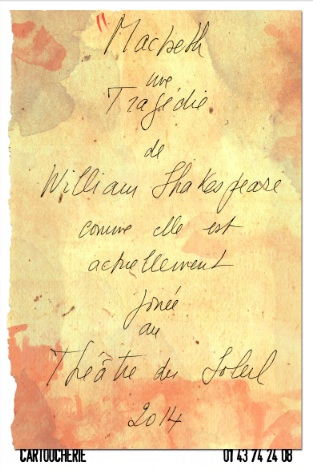 “Evil stands behind the door. You can hear it scream. Macbeth should never had thought of opening the door. Too late strikes like lightning.
Be warned! We think we should never allow the Macbeths to open the door. Evil is ready, lying in wait for just such a moment. Be warned! Evil knows no stop. Are you prepared?”
Hélène Cixous, February 1, 2014

Métro: Château de Vincennes (line 1) then bus 112 or free Cartoucherie shuttle (in French: ‘Navette‘), stationed across the street from the bus terminal

Special film screening at the historic Louxor cinema, designed in 1921 by architect Henri Zipcy and recently reopened to the public. The cinema features a neo-Egyptian façade with a mosaic by decorator Amédée Tiberti. 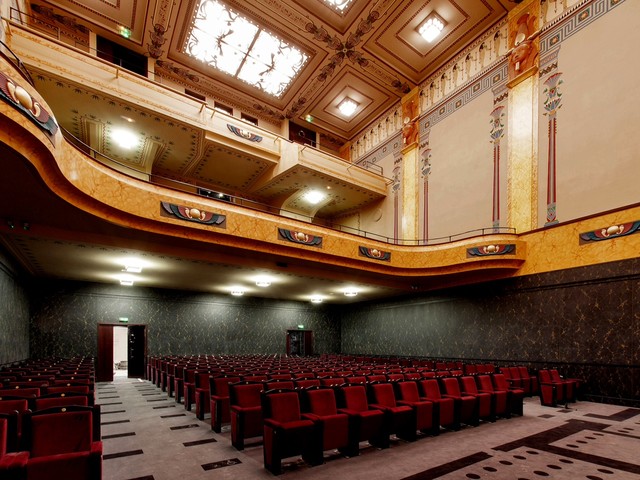 In Children of Paradise, Shakespeare is performed on a stage of the Boulevard du crime… 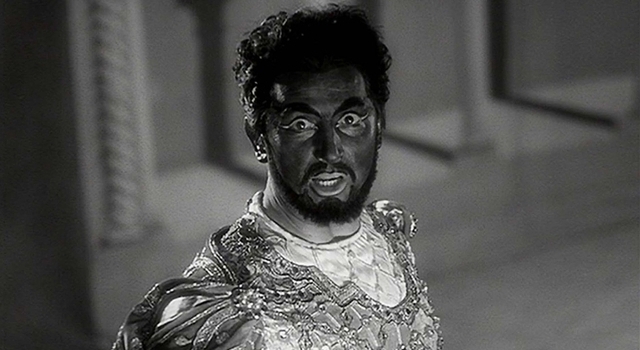 In Italian, with French subtitles. 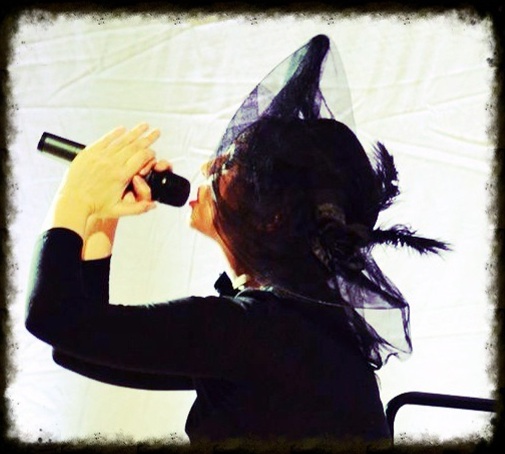 The Candlemaker (Candelaio) is a five-act comedy written by Italian philosopher, astronomer, and mathematician Giordano Bruno in Paris in 1582. It summarizes Bruno’s philosophical positions through a vivid representation of contemporary society.

In this production the eccentric structure of the play turns into a monologue interpreted by Angela Antonini who plays all the characters, passing from one mask to another, using different voices, clothes, gestures and various Italian dialects (Neapolian, Sicilian, Florentine, Venetian).

Dates: 25 or 26 April at 19:00. Participants may purchase tickets at the theater or online.

In French, without subtitles. 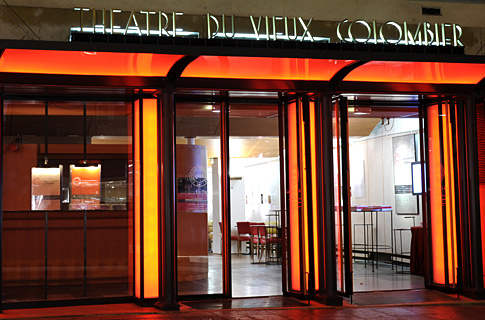 Following studies in literature and political science, Leonie Simaga trained at the National Conservatory of Dramatic Art. In 2005, she joined the Comédie-Française, becoming its 520th member in 2010. Her performances include the title role in Kleist’s Penthesilea directed by Jean Liermier, Polly Peachum in Brecht’s Threepenny Opera directed by Laurent Pelly, Hermione in Racine’s Andromache directed by Muriel Mayette-Holtz and Silvia in Marivaux’s Game of Love and Chance directed by Galin Stoev. At the Comédie-Française, she has directed Nathalie Sarraute’s Over Nothing at All and presented a carte blanche event based on Marguerite Yourcenar’s Memoirs of Hadrian. Beyond the themes of jealousy and gullibility, she views Othello as a meditation on this unjustified and permanent hatred of a civilization for individuals condemned to fight their entire lives in order to escape the defamatory label of “negro”.

Participants will have the opportunity to visit several exhibitions dedicated to Shakespeare during the week.

By invitation of the Museum. Scheduled visits for conference delegates.

Victor Hugo lived on the second floor of the Hôtel de Rohan-Guéménée from 1832 to 1848. He wrote some of his major works there: Marie Tudor, Ruy Blas, Les Burgraves, Les Chants du crépuscule, Les Voix intérieures, a large part of Les Misérables, and was visited by Lamartine, Vigny, Dumas and Gautier. The visit of the apartment illustrates the three main stages of his life (before, during and after exile) through the display of his furniture, different memorabilia and some astonishing interior decoration carried out during his exile in Guernesey.

Eugène Delacroix (1798-1863) was a learned artist. An avid reader, he loved music and often went to the theatre. In the 1820s and 1830s, he eagerly followed the changes in French theatrical practice. He was attracted by new notions on play-acting, notably those coming from England, as well as from the posthumous publication of Denis Diderot’s Paradox of Acting, which drew him to compare the abilities and artifice used by actors with the painter’s. In his Journal, an entry of January 1847 reads: ‘A painter must always improvise when he paints, and this is the crucial difference with the actor’s task.’

William Shakespeare and his work hold a special place in Delacroix’s paintings, drawings and engravings. The painter often mentions the English playwright in his Journal, observing how deeply Shakespeare had helped shape English culture: ‘The English are all Shakespeare. He has made them what they are in everything” (April 4, 1849). He also attended a performance of Hamlet in 1827 at the Théâtre de l’Odéon featuring Harriet Smithson, the famous English actress who so impressed Parisian audiences in the part of Ophelia. Delacroix was fascinated with Hamlet, the sensitive and tormented prince. As early as 1825, when he was only 27, he painted the scene of Hamlet and his father’s ghost (Cracow, Muzeum Universytetu Jagiellonskiego). In the early 1830s, he undertook a series of lithographs on Hamlet, in the same vein as his series to illustrate the French translation of Goethe’s Faustus, in 1827. In 1843, Delacroix himself paid for the publication of thirteen of his sixteen drawings. The Delacroix museum is fortunate enough to have all sixteen lithographic stones he used.

On the occasion of the 450th anniversary of Shakespeare’s birth celebrated in Paris, the Eugène Delacroix museum, located in the painter’s last home, where he lived from 1857 until his death in 1863, will show pieces from its collection, including the rarely-shown lithographic stones, as well as printed lithographs. Other Shakespeare-related works will also be exhibited, such as the moving Romeo and Juliet at the tomb of the Capulets.

Registered conference participants will be allowed to visit the museum free of charge. 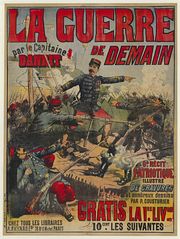 The exhibit discusses in great detail the events from July 23 to August 4, 1914, and the series of diplomatic, political, and military decisions which lead to the outbreak of the World War I.

By invitation of the BnF. Scheduled visits for conference delegates.

Performing Arts Department
A department that preserves and adds to the memory of all forms of performing arts (theatre, circus, mime, dance, etc.)
The department endeavours to store all types of materials produced before, during and after performances: scripts of plays, manuscripts, mock-ups, sets, costumes and objects, photographs, audiovisual materials, posters, drawings and prints, programs and press cuttings, etc., as well as books and reviews. Every expression of live performance is represented in its collections: theatre, circus, dance, puppetry, street, etc., as well as cinema, television, and radio. The department also holds a large number of archive collections and collections from personalities and institutions (theatres, festivals, companies, etc.).

By invitation of the BnF. Scheduled visits for conference delegates.

The Comédie-Française was born in the century of Louis XIV — the Sun King — from the centralising passion of a ruler known for his unwavering commitment to the performing arts.

Strengthened by its achievements, its battles and setbacks, armed with its traditions and its boldness, supported by its great actors, guided by its administrators, the three-centuries old Comédie-Française is more than ever passionately committed to live performance and ready to face the perils of the stage.

Backstage visit of the Comédie-Française for conference participants. 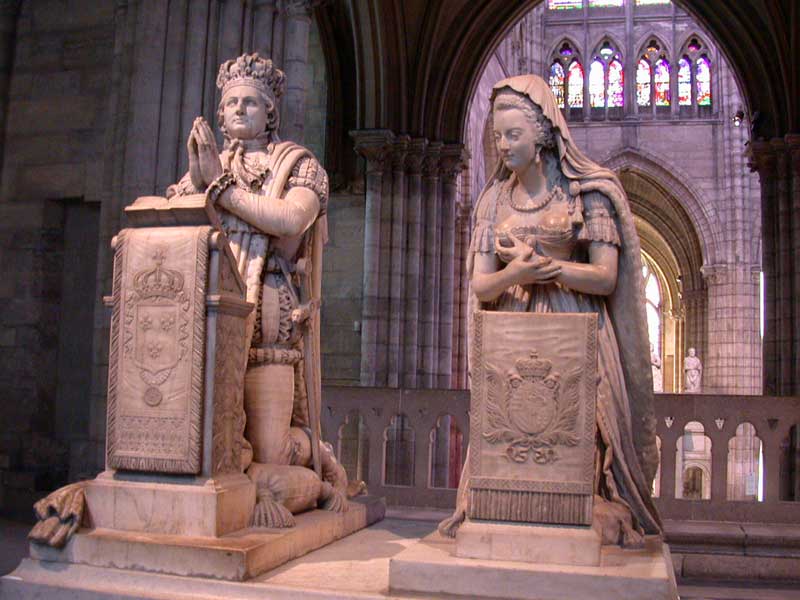 The St Denis basilica is the first monumental masterpiece of Gothic art. Discover the Royal necropolis and its collection of 70 sculpted recumbent statues – the only set of its kind in Europe – bathed in the multi-coloured light of the 12th and 19th-century stained glass windows.

Visit the tombs of Clovis, Charlemagne, Catherine de’ Medici, Henri IV, Louis XIII, Louis XIV, or Henrietta Maria (wife of Charles I), among many others.

On Sunday 27 April, a special visit of the basilica is scheduled with Serge Santos, head administrator of the Basilica.
The visit will be followed by “Royal Imagery”, a performance by Chantal Schütz and Yan Brailowsky, accompanied by François Bonnet (lute), in the apse of the Basilica.

Please remember you need to register online by March 31, 2014 for every event and reception you wish to attend.